My confirmation of acceptance into the 2015 Boston Marathon.

The Boston Marathon. The oldest and most prestigious marathon in the world.  One of the six World Marathon Majors, it is the holy grail of races in the running world.

The course runs through 26 miles of winding roads passing through eight Massachusetts cities: Hopkinton, Ashland, Framingham, Natick, Wellesley, Newton, Brookline and into the center of Boston, where the official finish line is located at Copley Square.

The Boston Marathon is considered to be one of the more difficult marathon courses because of the Newton hills, the famed Heartbreak hill, and the unpredictable weather conditions. Runners 18 or older from any nation, are permitted to run the Boston Marathon, but unlike most marathons they first have to complete a certified marathon course and meet the qualifying standards approximately 18 months prior to the race day they want to participate in.  Even if you meet the qualifying standards, depending on the field size of the race that year and the number of applicants, you aren’t guaranteed a spot.  In 2015, you had to be a minute and half under your qualifying standard to run the race.

My Experience at Boston

I was pretty psyched to receive my Runner Passport. I had been waiting for that Golden Ticket for a year!

This event will forever be one of my favorites on the timeline of my life. I started the Hanson Method, 18 weeks out, to prepare for a 3:30 finish time on the course. Because the race is in April, and I live in Colorado, much of my training had to be done indoors on a treadmill. As the weeks and days grew closer to Boston so did my excitement.

My younger sister flew in from Utah to help watch my kids. This day was a big preparation day.  My suitcase, a whopping 49 pounds, was filled with food to help me carb load the four days before the race and included my breakfast essentials for the morning of the race.

My husband and I awoke at 4 am to make a 7 am flight out of Denver for Boston. This was also my official first day for carb loading for the marathon. My carry on had so much food in it, but I was prepared! We touched down in Boston and I got a message from my Boston Marathon app welcoming me to the Boston Marathon.  We grabbed a taxi and arrived at the Boston Intercontinental Hotel about 15 minutes later–the Boston Logan Airport is so close. After check in, I did a quick 5 mile recovery run and then we hit Little Italy for dinner at Al Dente and dessert at Mike’s Pastry–the infamous Florentine cannoli. Yum! Shortly after, we met up with Natalie and Clint Brown, who had come in on a later flight and joined them for dinner at Quattro–seriously delicious food. After another stop at Mike’s Pastry for some more cannoli’s, we headed back to the hotel to get some rest.

The Boston Intercontinental is a very comfortable, very quiet hotel in a great location. I slept so well every night we were there which is very atypical for me at most hotels. It is close to Boston’s charming Little Italy, but also right across the street from the Quincy Market and Faneuil Marketplace–tons of restaurants and shops there. It is also very close to the subway system. (We will stay there again in 2016!) 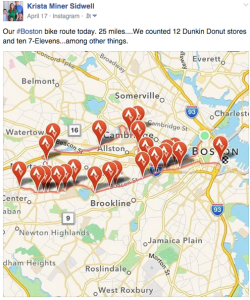 Biking 25 miles of Boston before the 2015 Boston Marathon.

Before arriving in town, we had reserved bikes to tour the city on Friday morning. We awoke to rain and wished we could have cancelled our reservation with Urban AdvenTours–3/4 of a mile from the hotel, but in the end the rain didn’t really affect us that much.  We rode almost 26 miles that day stopping at the Converse headquarters, touring Harvard, Harvard Square, the Harvard Bookstore, eating at Bartley’s (delicious burgers) in Cambridge for lunch, and ultimately biking to the Newton hills–our main purpose for renting the bikes.  We wanted to check out what we were in for on the course. It was a really good thing we did this.  It really helped us to know what to expect. (And it showed me that I really need to work on my cross training–my quads were burning biking up those four hills.)  After the Utah Valley Marathon, I really wasn’t intimidated by the Newton hills. It was reassuring to see that they weren’t very long. (The Utah Valley Marathon has one mile and 2 mile hills.  . . .) We left the Newton hills and biked the rest of the course all the way to the finish line area.  It was fun to see all the preparations for the upcoming race. Boston was transformed from my visit a year earlier. 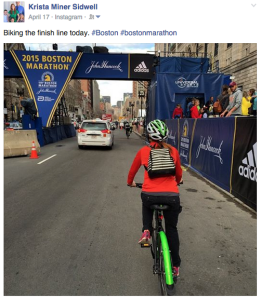 Biking the finish line at the Boston Marathon the Friday before the event.

After seriously tiring out my legs biking the city, I worried a little that I may have burned more glycogen than I should have considering I was preparing for a marathon. I silently committed to trying to not exert myself as much the rest of the trip.  No need to run this day–we did all our work on the bikes!

After biking the city we got cleaned up and tried our first experience with an Uber Car–I’ll never go in a Taxi again.  We went to Scoozi for dinner (pizza) and then headed over to Fenway Park to catch a Red Sox vs. Orioles game.  I was so excited for this experience, but the crowd we were sitting by (the drunk girls that spilled beer all over me) and the distance we were from the game just really ruined it for me. We arrived home after the game and I was out the minute my head hit the pillow.

At the 2015 Boston Marathon Expo with my ‘team.’ (Natalie and Clint Brown, Stephen Sidwell, and myself.

Getting my race bib. That was pretty exciting.

After a lazy morning, we tried out the subway system to hit the marathon expo and get our bibs, race bags, and other race souvenirs. I knew there would be masses of people, but wow. The expo was exciting and fun, but definitely not something you need to spend too much time at.

(Get there earlier on though; they were selling out of the complimentary posters that have all the athletes’ names on them for that year and other stuff.)

After our time at the race expo, we took our rental car up the coast to Salem, and Rockport. Salem wasn’t all that impressive. Rockport didn’t disappoint, although our Roy Moore’s Fish Shack Lobster rolls and clam chowder did. We don’t plan on renting a car when we return in 2016. We are going to spend more time just checking out Boston, but we did enjoy our little jaunt to the coast.

Before we returned to the city, we took advantage of hitting a local Walmart to find some disposable clothes for race day that we could abandon on the course or shortly before. All the clothes in the women’s department were more than I wanted to spend to just throw them away, so we hit the juvenile clearance racks and I scored a sweatshirt and sweatpants for $3 each.  Perfect.

Upon returning from our coastal journey we decided to hit Little Italy again for dinner and man did we score this night!  We stopped at a bread shop called Bricco Pannetteria and had some of the best bread of my life.  It was steaming and warm which was perfect since it was cold and we were starving! We shared a homemade baguette filled with small pieces of melted cheese and prosciutto. Heaven. Then we went for our dinner reservation (I made Open Table reservations before we arrived in Boston) at Nico–my favorite meal of the trip. Stephen and I shared an artichoke and sausage rigatoni and Natalie and Clint had some of the best spaghetti with meatballs I have ever tasted!  Yum. Authentic Italian just can’t be beat. They seated us in a cozy basement which was also very fun. I had no idea the restaurant even had a basement and then presto, there we were.

Sunday, April 19, (One day before the Boston Marathon)

The 294 Steps up to the top of the Bunker Hill Monument.

We awoke early, had breakfast (I was really counting my carbs this day) and headed to church. We still had the car so we were able to just drive there.  After church, we were so close to Bunker Hill that we went and checked out the monument and foolishly paid the ticket to climb the 294 steps to the top.  After that, I vowed that for the rest of the day I would get off my feet! And I did.  We went back to the hotel and chilled for the rest of the afternoon until it was time to go to the Pre-Race Dinner that we had tickets to.  While we were relaxing at the hotel, one of the things we did that was seriously a good idea was watching an online video of the Boston Marathon course that had commentary on what to look for and strategy tips.  I am so glad I watched that the night before I raced because we weren’t able to bike the entire course and that helped me visualize it and mentally prepare.

So, attending the Pre-Race Dinner….yeah, that was a seriously BAD idea.  First, it was freezing, and secondly, the line stretched FOREVER to get your food from the assembly line. Seriously, I think we were in line at least 35 minutes and then we had to eat OUTSIDE. In the freezing cold.  And the food was just so so.  I will not ever do that again. Total waste of calories and time. After dinner, we headed back to the hotel to prepare for an early turn in. Boston Marathon eve had arrived!! 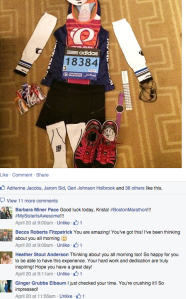 Laying out my clothes the night before the Boston Marathon.

I laid out my clothes and tried to calm my nerves before one of the most anticipated days of my life!

I climbed into bed, and slept fairly well–not as well as the other nights, but I didn’t really expect too. Too much excitement for the next day starting to pulse through my system.

My story continues with my next entry: The 2015 Boston Marathon: Race Day